Born in Ontario, Canada in 1969, Stephen moved with his family to Vancouver, BC in 1978 then onto Calgary, Alberta in 1984 where he still resides.   Stephen was educated at the Alberta College of Art and Design and has worked as a professional artist since 1994 as a painter, muralist, and fine art instructor. His art draws on both contemporary and traditional styles, with a special focus on western Canadian themes.

Part of Stephen’s growth as an artist has come from his travels throughout Canada, the US and Europe. Having resided in various regions of Canada, he is inspired by diverse landscapes, including the western prairies, grasslands and foothills, Canadian Rockies, Pacific Coast, and rugged terrain of Eastern Canada.   Stephen has been influenced by many Canadian artists and has an appreciation of the works of the Group of Seven.  He has also been influenced by the example and instruction of many professional artists.

Stephen has had opportunities to work and show in a variety of interesting locations, including Charleston, South Carolina and the Calgary Stampede Western Showcase.  Stephen’s original concept development and unique designs for his fine art and mural work small and large scale can be seen in various businesses, private homes, and public spaces.  Currently Stephen is involved in many local shows including CSpace King Edward, Calyx Art Show, Handmade Here, Calgary Stampede Western Showcase, Wildflower Salon Show & Sale and his home studio.

Stephen enjoys working primarily in oils, but also works in other mediums including acrylics, watercolours and charcoal. In addition to landscape, portraiture and other subject matter of interest to clientele are welcomed and Stephen will create custom (commission) pieces to client specifications and satisfaction.

Stephen has also been teaching art in a variety of mediums for over 20 years.  He is involved with and teaches at several local art clubs, summer programs at Mount Royal University, Wildflower & Northmount Pleasant Arts Centre, and privately in his home studio.  He has also had the pleasure of participating as Artist in Residence at many Calgary public schools, and community improvement mural projects for the City of Calgary and private clientele. 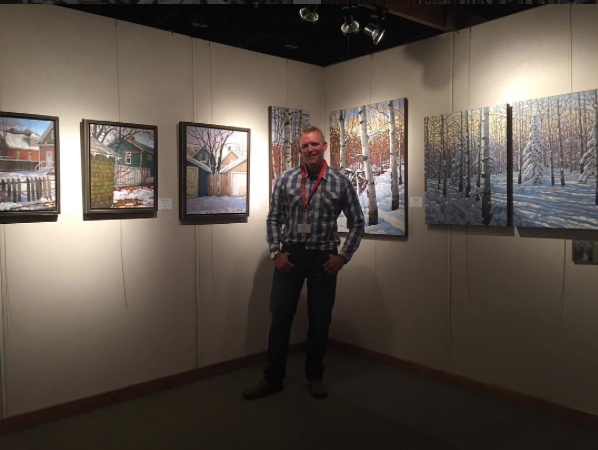